Nestled in the heart of the Beaufortain Valley at an altitude of 1150 m, Hauteluce stands out for its baroque church of Saint-Jacques d’Assyrie, with a bulb-shaped spire and a trompe l’œil facade. This local curiosity is today listed as a historical monument on the  baroque route. To this should be added the authenticity of the chalets and of the neighbouring farms, with the amazing setting of Mont-Blanc as their background.

The village shopkeepers are delighted to welcome you to help you get the most from your stay, including the newsagents and tobacconists, the grocery store, the village bistros, the decorative stores, workshops and a sports shop. In the main town you'll also find the town hall, the post office and a library, the tourist office and its eco-museum.

Summer in the Beaufortain Valley

At an altitude of 1150m, the village of Hauteluce is the ideal starting point to enjoy the many natural attractions and the cultural, leisure and sporting activities of the Beaufortain area.

The mountain guides and ski instructors will help you discover the mountain as you have never seen it before. Whether amateurs or experts, these professionals provide all the support you need to enjoy a unique experience. 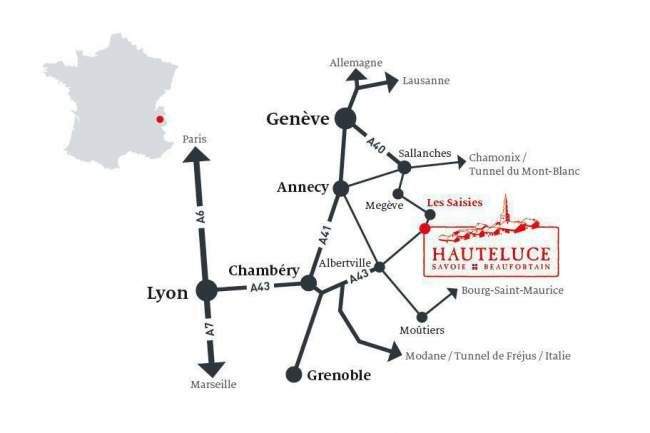 Dream holidays
between Savoie and Haute-Savoie

Situated in the village of Hauteluce in the Beaufortain Valley, La is connected to the resort of Les Saisies by the ski slopes. It is situated 4 km from the departure point for Les Contamines-Monjoie. To reach the hotel, please follow the instructions below:

From Geneva:
On the A40 motorway, head in the direction of Geneva-Chamonixand take the Sallanches exit. Continue towards Megève (N212), passing through Megève then Praz sur Arly. After Praz sur Arly, leave the N212 and head towards Notre-Dame de Bellecombe - Col des Saisies as far as Les Saisies. Continue through Les Saisies and follow the signs for Hauteluce for 6 km. Enter Hauteluce and take the first road on the left at the panel marked "La ". The hotel is situated just alongside the Chozal chairlift.

From Albertville:
On the A43 motorway, come off at Albertville and head towards Le Beaufortain.Head in the direction of Hauteluce for approximately 9 km, then enter Hauteluce and take the first road on the left at the panel marked "La ". The hotel is situated just alongside the Chozal chairlift.

Located 25 kilometres from Albertville and Megève, the village of Hauteluce is accessible by car or train (TGV high-speed train service to Albertville, followed by coach shuttle service or taxi).

Hauteluce, which is listed as one of France's finest villages, is situated at the start of the Route des Grandes Alpes among several legendary passes including: the Cormet de Roselend, the Col des Saisies and the Col des Aravis